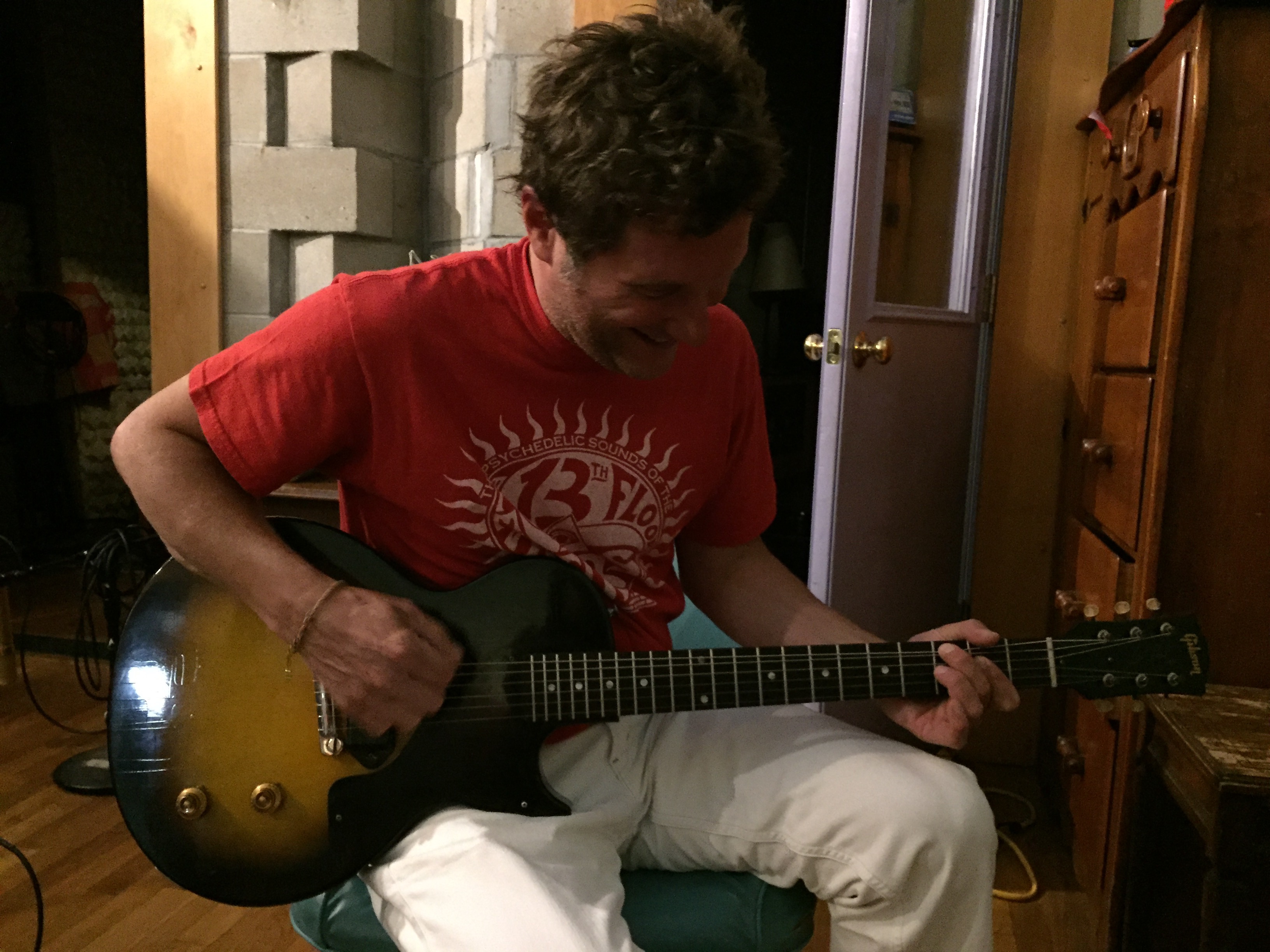 Long-time popster Baldrachi blazes through power chords and unbridled energy to tell the story of a partner who must learn to plow through that which is keeping her from enjoying life. There is hope, as a chorus of voices sings: “We’re gonna turn it around.” Certainly, the happy-peppy tune that Baldrachi has conjured up can contribute to that eventuality. It certainly keeps the ears tuned to this modern power pop classic.

I may have jumped the gun (but not the shark) with my review last issue of an advance copy of this Beantown power-pop rocker’s second LP, with guest spots from ‘60s legend The Small Faces’ Ian McLagan and Amy Rigby, among many. Because now that it’s officially released, it has a new title, and more importantly, has been thoroughly remixed by Ed Stasium, who’s earned respect from his production of the ‘70s Ramones to his expert mix of Nada Surf’s The Weight Is A Gift. The result is the same cool record – which I loosely referenced The Posies, Andrew Gold, Terry Jacks, and Big Star’s “laaaaa-laaaaa” backing vocals in describing, – only it sounds even better. This, also, remains true: “His tunes and good guy personality/voice are for cheerfully whistling while you work.

Powerpop doesn’t usually grab the sort of critical acclaim some of the more esoteric genres do. What’s accessible can feel a little too easy for those of us who’ve spent hours listening to freak folk or acid metal. It’s a shame though and Peter Baldrachi’s a great example of why. It takes a few listens before realizing the highly respectable veins that this singer songwriter pulls from and why that makes it ok to like him. Paul Westerberg, Matthew Sweet, Big Star – nothing bad about any of those guys. Just enough country to give it soul and just enough melody to give it pop, this guilty pleasure feels less and less guilty every time you hear it.

Just in case you missed Baldrachi’s release last year, he mentioned to me that he felt the album was kind of rushed out and wasn’t too happy with the mixes. Well… Back To The Start is a re-boot for Baldrachi. All the tracks have been remixed and mastered by Ed Stasium (Ramones, Mick Jagger, The Smithereens, Reverend Horton Heat, Nada Surf) at The Kozy Tone Ranch. Plus a new song “Picture On My Wall” is included and like the rest of the album it’s excellent. Peter is assisted by guitarist, bassist, and arranger Gary Rand, keyboardists Dave Lieb (The Vinyl Skyway) and Peter Linnane (The Farewells), backing vocalists Alice Austin (The Lavas, Stark Raving Mad) and Amy Fairchild, 2012 Rock & Roll Hall of Fame inductee keyboardist Ian McLagan (Faces, The Rolling Stones, Billy Bragg), singer/songwriter Amy Rigby (solo, Wreckless Eric), multi-instrumentalist Ian Kennedy (Reverse, Dennis Brennan), and cellist Aristides Rivas. The songs shine just as brightly as before, if not more so with the new mastering. It made my top ten list last year. You have no excuses! Get this one! (9 out of 10)

Boston-based singer/rocker Baldrachi releases a strong set of rave-ups, rockers and ballads loaded with hooks and Gary Rand’s wildly expressive guitar. ”In the Dead of Night” opens with power chords and a righteous hook with backing chorus. ”Make It On Our Own” is an anthem to independence with a locomotive beat and good bones. ”Promise Me a New Start” with its acoustic intro and harmony by Amy Rigby is very Mellencamp/Scarecrow in sound and theme, about a guy looking for a new start. Three smart fast rockers to start. “Pray For Rain” sounds like Nashville power pop, guitars speaking with a southern twang and echoes of Buffalo Springfield. ”Pick Up the Pieces” exudes a sweet country vibe thanks to the mandolin. ”Someone Isn’t Me” is major-chord full-throated rock with Rand laying it down like Van Halen. The C,S and Nashish “In the Name of Love” has that Laurel Canyon lilt, acoustic guitars. Even without the backing vocals it sounds great. I also like how their logo resembles the old Blue Note mark.
Four stars.

Boston guy who looks like he could play a sinister criminal is any # of Hollywood films (character actor?). Musically, I thought had been around forever but his first solo record 2006, still though, this is good punchy power pop with plenty o;’ hooks and strong songwriting. Hollywood or a music career? You decide, Peter.

“Okay, where has Peter Baldrachi been hiding that I haven’t heard of him? I’m sure he hasn’t been hiding, I just missed him somewhere in this sphere of Boston music but I’m glad to have found him now! Due to circumstances unfortunately beyond my control, I got quite behind in my CD reviews and since this was submitted, I believe he has released another, but this still very much deserves a review. Tomorrow Never Knows features a refreshing blast of commercial pop rock tunes; Peter’s music is upbeat with a perfect blend of a Brit-pop / American alt rock feel with decided dashes of twang. I absolutely adore it. Accessible, catchy, and happy—we all need music with a goodtime spirit and Peter’s got it—not to mention that the production is outstanding. It’s a very rare and special thing to love every track of a CD but I can honestly say with Tomorrow Never Knows that I did. Can’t wait to hear the next!”

“Talk about a transformation. After manning the skins for Boston’s Krushr, a hard-rock outfit that drew comparisons to everybody from Nirvana to Queens of the Stone Age, drummer-turned-singer-songwriter Peter Baldrachi turned down the volume and turned up the melody. The result is his solo debut, “Solid Ground,” whose wistful charm and warmly ragged pop hooks owe far more to Paul Westerberg than Kurt Cobain. The ground Baldrachi’s standing on these days may not be as rock hard, but it’s a lovely landscape with a gorgeous view.”

“Baldrachi, drummer for Krushr – a band that released a self-titled EP in 2003 – proved on this debut LP that going solo was a wise decision.  He’s composed a superb and crackling power-pop LP that overflows with catchy melodies and exquisite harmonies.  It compares favorably to artists like The Posies, Matthew Sweet, Cosmic Rough Riders (and Daniel Wylie’s solo records), and yes, even Big Star.  Perhaps it’s not so unexpected when one considers the influences listed on his MySpace page.  The style is in his blood.  Baldrachi mans the skins and compiles a splendid collection of backing players including colorful guitarist Gary Rand and gorgeous vocalist Alice Austin.  Each expertly crafted song resonates right down to the sighing, swooning choruses on the beautiful, Teenage Fanclub – like closer “What Do You Want From Me.”

“Peter Baldrachi evokes the usual suspects on his solo debut, summoning up the spirit of ‘60s Brit rockers and ‘70s retro revivalists. As a relative newcomer – he previously recorded occasionally with the Boston band Krushr – Baldrachi seems remarkably assured, thanks in large measure to a power pop instinct that’s unfailingly infectious and unceasingly compelling. In fact, he may be the most commanding singer/drummer since Dave Clark, although his swagger and sneer position him closer in stance to John Lennon and early Elvis Costello.

Solid Ground is more than merely a one-man show; cooing harmonies, relentless riffing and effusive melodies provide a consistent surge throughout. Nevertheless, Baldrachi anchors the undertow with assurance and precision, from the tumultuous stomp of album opener “Solid Ground,” through to the driving pulse of “A Better Place” and the didactic delivery of “Making Sense.” Even so, the band’s at its best when they tow a melodic middle ground, whether it’s the gentle Byrds-like swoon of “What Do You Want from Me” or the gentle sway of “Breakdown.” Mostly, it’s a sense of instant familiarity that pervades the set as a whole, as if Baldrachi has harnessed the classic sounds of the past four decades and repurposed them with his instincts and ambitions.  As its title implies, Solid Ground is a solid beginning. By glimpsing back at the past, Baldrachi can look forward to a future that seems all but assured.”

“Solid Ground, from Boston’s Peter Baldrachi, grabs you right from the get-go with the staccato guitar riff and pure power pop chorus of the title track, and doesn’t let you go until it’s over. “A Better Place” and “Breakdown” follow with more of the same, and you’ll probably already have given your credit card info to CD Baby by the time the 2-minute sample ends. But if you haven’t, the midtempo “You’re Gonna Miss Me Someday” probably will get you to do so. Other standouts include “Wait In Vain” (which reminds me of the great Aussie band The Chevelles), the Smithereensesque “Round and Round”, “Start It Up Again” (I’m hearing some Eugene Edwards there), “Making Sense of Nothing” (which borrows the melody from Paul Westerberg’s “Silent Film Star”), the jangly “(Are You Sure) That We Belong” and “What Do You Want From Me?” which has a Teenage Fanclub feel to it. Wait – I just listed every track on the disc. Gee, I guess they’re all standouts. This is really a quintessential power pop album; if you were to look up “power pop” in the dictionary, there ought to be a picture of this disc staring you back in the face.”

“I’m not sure, but I really have to wonder if this is the first power pop record where the main songwriter was the drummer. It’s not that I’m surprised that he sings lead while drumming (as that’s not incredibly rare), but that he actually wrote all of the music on this record (save one song) without playing a single note of it. For that, he’s joined by his bandmates on guitar and bass, with additional help from friends on keyboards, additional guitar and backing vocals. The music is a hodge podge of various typical power pop styles, from the crunchy sound of the title track and “Start It Up Again” to the heartbroken Beatlesesque jangle of “You’re Gonna Miss Me Someday” to the country-influenced twang of “Breakdown” and “Wait In Vain”. But even with the variety of styles, Peter and his band go from one to the other with ease, bringing the record together quite nicely. That, and the strong songwriting, makes this a fine debut album!”

“Feel-good late-’70s early-’80s power pop chock-full of hooky riffage and blame-free attitude. Call me a sap, but this sort of music puts a big grin on my face. From the Beatles-Cheap Trick inflections of “Solid Ground” to the “Prettiest Girl”-like “A Better Place” to the Stones-Deep Purple-Eagles perplex of “Breakdown” the best umbers are a retro feast of well-crafted pop-rock tunes. Of the more original numbers, “You’re Gonna Miss Me Someday” is a hoarsely insinuating ballad and “Wait In Vain” is an optimistic power-pop love-letter. The release loses steam about midway through but is still a worthy addition to the canon of Boston rock ’n’ roll.”