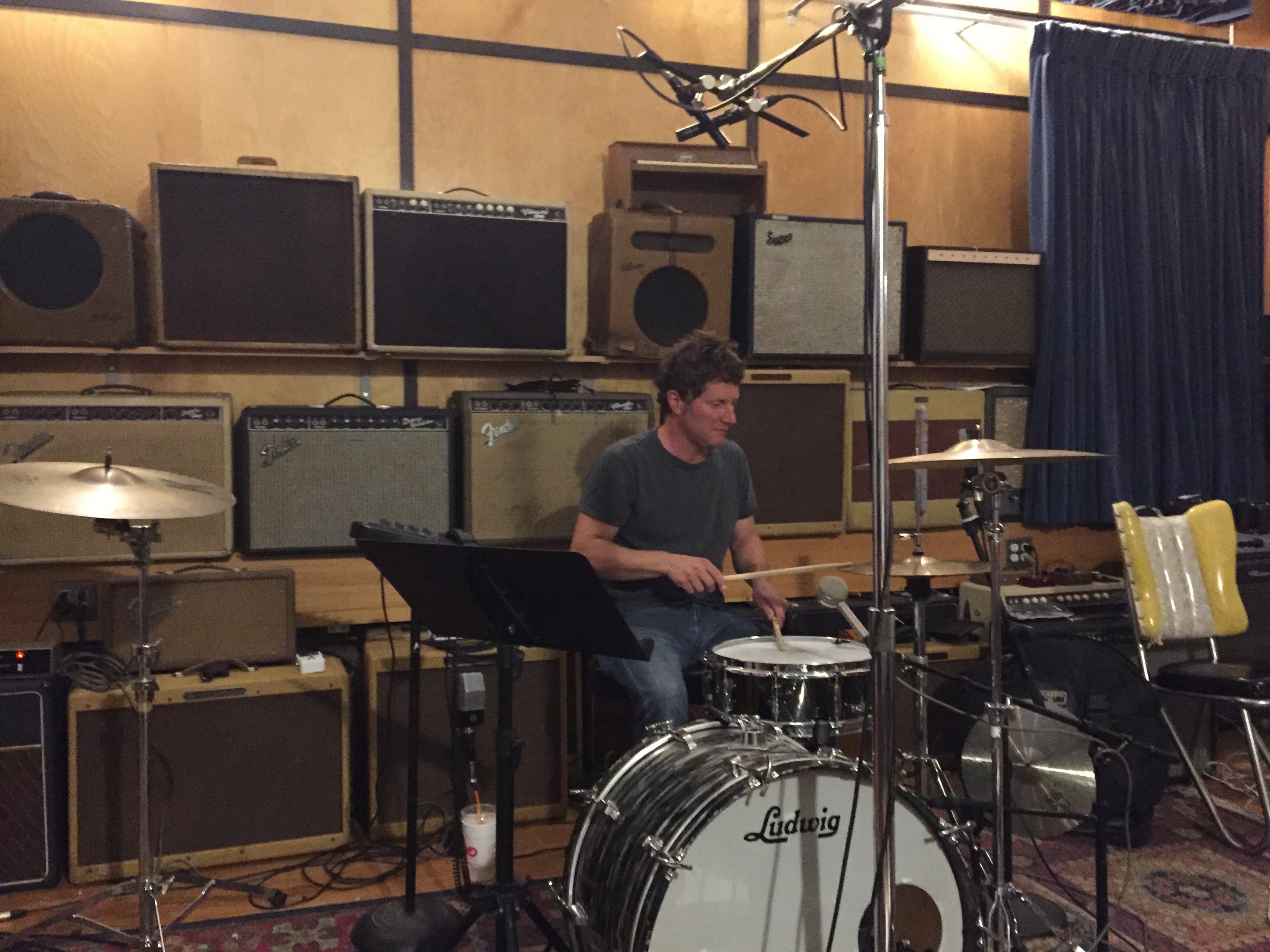 I’ve just finished laying down all the basic tracks with David Becker on bass and Mike Herman on guitar. Only a few things left before we mix!!!

The third single from 2020’s Slow Recovery is now available for download at the Store Page.

I was recently at Rear Window Studio with Milt Reder (guitar), Dave Becker (bass), and Craig Welsch (engineer) laying down basic tracks for three new songs. On the other side of the pond at Heyman Studios in Copenhagen, Billy Cross laid down some rhythm and lead parts with Christian Heyman Zinckernagel.  Hope to be finishing these up soon.

The second single from my current album is now available for purchase. To download or stream your copy, visit the Store Page.

I’m happy to announce that my new album Slow Recovery is out today! It was a pleasure to work with so many immensely talented and down to earth musicians and engineers. I can’t thank everyone enough involved on this project – Gary Rand, Ingrid Gerdes, Milt Reder, Duke Levine, Brad Hallen, Dave Mattacks, Dean Cassell, Peter Linnane, John and Scott Aruda, Paul Wolstencroft, Jay Stanley, Steven Jurgensmeyer, Kerm Mogensen, Corbin Smith, Craig Welsch at Rear Window for engineering, Benjamin M Grotto at Mad Oak for mixing, and Joe Lombard at Joe Lambert Mastering. To order your copy, visit the Store Page.

At last, Slow Recovery is available for preorder at Bandcamp.today!! You can also order a copy from the Store Page. The album will be released worldwide on May 15th!!

The title track of my forthcoming album is available for download or streaming on the Store Page.

The Change EP – a collection of my last four singles and newly mastered by Joe Lombard ant Joe Lombard Mastering – is now available for download or streaming on the Store Page. Big thanks to Ed Stasium, Benny Grotto and Craig Welsch!!

My latest single release is now available for download or streaming. Visit the Store Page to get your copy!!

So honored to have my singles “Breathe” and “Saturday” played on legendary rock vocalist and producer Genya Raven’s show Goldie’s Garage!! Be sure to tune in every third Friday of the month at 11 p.m. to hear the latest and greatest unsigned garage bands!!

My latest single release“Saturday” is now available for download or streaming from all major digital/streaming services!! Visit the Store Page and get yours today!!

Duke Levine was in to record guitar and dobro parts, Jay Stanley laid down some percussion, and Ingris Gerdes was back to finish up more backing vocals.

The last few months has us just a little closer to completing the new record!! I’ve been lucky to have Milt Reder, Dave Mattacks, Ingris Gerdes, and Brad Hallen all contribute great performances with Craid Welsch engineering over at Rear Window Recording Studio. We will begin mixing a single for release soon.

Just laid down the basic tracks on a new song with Milt Reder on guitar and Dean Cassell on bass at Rear Window Recording Studio.

Producer/engineer extraordinaire Ed Stasium who also mixed 2012’s Back To The Start, recently remixed the track “You’re Gonna Miss Me Someday” for a single release. It was mastered by Peter Linnane at Patch Hill Mastering. It can be purchased on iTunes, Bandcamp, and many other digital outlets.

The last few months have been spent finishing up the basic tracks for the new album. We have been recording over at Rear Window Recording Studio in Brookline with engineer Craig Welsch. In January, Gary Rand put down rhythm guitar on six songs with a choice selection of killer vintage guitars and amps. In March, Gary finished up the rest of the songs, and Peter Linnane of The Farewells played piano, Hammond B3, Mellotron, pump organ and Farfisa on several tracks.

After a slow summer, we’ve recently been laying down the basic tracks and vocals for the next album during September and October at Kissy Pig in Allston. Once again, Gary Rand has played all guitar and bass parts, and co-wrote most of the album’s tracks with me. Keyboardist Peter Linnane recently added some excellent keyboard parts, and Corbin Smith has also been doing some additional engineering and editing. Also, be on the lookout for a new single at the start of 2015!!

I’ll be playing at this year’s IPO on November 21st at 9:00 p.m. @ Precinct in Somerville and once again backed by Gary Rand on guitar, Andy Plaisted on Drums, Marc Hickox on bass.

Jack Rabid from The Big Takeover and David Bash from International Pop Overthrow both placed Back To The Start on their end of the year list of their favorite releases of 2012!!!

I’ll be playing at this year’s IPO on November 14th 9:00 p.m. @ Precinct in Somerville backed by Gary Rand on guitar, Andy Plaisted on Drums, Marc Hickox on bass, and maybe a few more friends too!! Hope to see you there.

Download the second single from 2012’s Back To The Start beginning on Tuesday, August 28th at Bandcamp, iTunes, CDBaby, or Amazon mp3.

I spent the last two days at Kissy Pig Studios laying down some basic tracks with Corbin Smith engineering. Guitarist Gary Rand and I worked on five new songs we wrote plus another of Gary’s with at least a half dozen more to start work on in a few months. Thanks to Carl Plaster for a killer job tuning up the drums too!!

“In The Dead of Night” has been remixed, remastered, and re-released. It is available for download beginning today.

Producer and mixing engineer Ed Stasium is currently remixing the last record at Kozy Tone Ranch for a May 2012 release.

Dave Leitch was in the studio recently laying down bass on a new track I’ll be releasing as a single.

Visit the Press Page to read the recent review of Tomorrow Never Knows on Powerpopaholic.com Also, look for Jack Rabid’s review in the upcoming issue of The Big Takeover. Check out his weekly radio show every Monday at noon on BreakThur Radio.

I’m happy to announce the release of my new record Tomorrow Never Knows. It was recorded at Kissy Pig Studios by K.R. Mogensen and mixed by Paul Q. Kolderie (Radiohead, Pixies, Hole, Portugal. The Man) . Visit the Store Page to purchase it today!!

“In The Dead Of Night” is Absolute Power Pop’s Single Of The Day!!

Special thanks to Leslie at Bunnell Design for creating the new site!!

It was unfortunate to read the other day that after fifteen years, Not Lame Recordings has announced it will no longer exist. My thanks, as well as those of many other pop fans and musicians, go out to Bruce Brodeen for his endless support and exposure to rock and power pop artists from around the world. Be sure to check out his latest musical venture – Pop Geek Heaven.

We’re currently working on arranging vocal harmonies, and adding additional guitar, keyboard, percussion, etc. Also, I hope to be mixing a few tracks left off the last record as either downloads for inclusion on a future compilation.

Best wishes for a Happy New Year to everyone!! It has been a while since I’ve posted anything. However, I am in the process of recording new songs at Kissy Pig Studio in Allston, MA. So far, we’ve recorded all the drums and basic rhythm tracks. The sessions have been very productive, and the basic tracks are sounding great.

I’ve just started recording new tracks for my next album. I am once again working with K.R. Mogensen at Kissy Pig Studio in Allston. Several of the new songs were written over the past year with Gary Rand who will be playing guitar, bass and arranging the backing vocals. I’m certain many of my friends who worked on Solid Ground will also be lending their talents to this project. We’ve written over a dozen tracks, and plan on working on a few more.

I’ll be playing The International Pop Overthrow on Saturday, November 22 at Church @ 9:00 p.m. The IPO runs from from November 20-23. Check out their site for more info on all the great bands playing this year. www.internationalpopoverthrow.com

I have one track, “You’re Gonna Miss Me Someday,” included on the new IPO collection available at NotLame.com. Sixty-six indie power pop and rock bands on three CDs for only $18. Special thanks to David Bash at IPO and Bruce Brodeen at NotLame for another great compilation. Order yours today!!

Summer wishes to everyone!! Since becoming a new dad in May, I’ve been quite busy. Naturally, music has taken a back seat. However, right now I’m in the process of finishing up some new songs with pal Gary Rand. We’re currently readying these new tracks and hope to begin recording sometime late summer/early fall with KRM of Kissy Pig Studios once again at the helm. I’m also in the process of booking some fall gigs so check back soon for new dates.

Happy Birthday to Mike Mascis!! It was great to see Miss Spent Youth, Leo, and playing with The Warblers once again!!

Start your St. Patrick’s Day celebration early and come see us on March 16th at The Abbey Lounge @ 9:00 pm.

We’re playing at All Asia on Friday, February 15th @ 10:00 pm. Come and check us out if you can. Also, there is a interview in the February 2008 issue of Metronome Magazine. You can pick up a free copy at Newbury Comics and other record shops or music stores in and around town.

You can read Lee Zimmerman’s review of Solid Ground at Amplifier Magazine on-line.

We’ll be playing at Harpers Ferry in Allston on Sunday, December 30th. This is an early show, and we are on at 9:30.

Jonathan Perry has a nice piece on this weekend’s International Pop Overthrow in “Rock Notes” in today’s Living Arts section of the Boston Globe. The article highlights The Mystery Tramps, The Prime Movers, The Vinyl Skyway, Bird Mancini, One Happy Island and yours truly.

We’ll be playing the International Pop Overthrow at Great Scott in Allston on November 5th at 9:30. This is our first time at the IPO, and we’re looking forward to playing and seeing tons of great pop bands!! This year the IPO will be in town from November 2-6.

We’ll be at The Abbey Lounge in Somerville on Sunday, September 30th with Pukka Argot, Bird Face and Art Of All. The show starts at 9:00 p.m.

Read Mark Suppanz’s review of Solid Ground in the latest issue of “The Big Takeover.”

Solid Ground is the featured CD of the day!!

After three long years, my first “solo” record Solid Ground is finally being released!! I can’t begin to thank everyone enough for all the help and support along the way – especially everyone at Kissy Pig Studios and all the friends who gave of their time to play on this record. I had the opportunity to work with so many talented people, and it was their contributions that made this project so much fun. The album is currently available at Amazon, CDBaby and iTunes!!